Balance has been on my mind.  Some of it has to do with the political news, some with my life, but I decided to write about it because of a news story about the Wallenda family.

You know who they are?  The crazy people on the high wire, that in some form or other, for over 95 years have thrilled and scared the life out of people.  All at the same time!  This week while they were practicing for a show in Florida, they attempted an eight person pyramid.  I say attempted, because they did not complete the stunt, as one of the performers lost their balance and they fell.  Some were

hurt, and thankfully all will recover.  As soon as this horrific event happened, they immediately started looking for a cause.  The most likely culprit was the rigging, and it was the first thing they checked, but it wasn’t the rigging.   They determined that it was the most simple, yet most important thing in an aerial act.  Balance.

Whenever the king consulted them in any matter requiring wisdom and balanced judgment, he found them ten times more capable than any of the magicians and enchanters in his entire kingdom.  Daniel 1:20 NLT

I always love going to see what the bible says about these words that prick my interest.  The verse above is from the story of Daniel and his friends.  They had been taken as slaves to Babylon, but they were pressed into service of the King.  These young men were able to come out of this horrible situation, and bring wisdom to this man.  The advice they gave was wise, but I love that it is noted that their judgement was balanced. 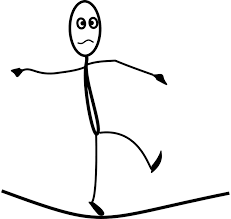 I think of this world right now, and I do not hear a lot of balanced judgement or much wisdom.  And like it was for the Wallenda family, I think that lack of balance has the potential to cause much harm.  There are times that I am encouraged though, as I try to find balance in my own life.  I continue to see glimpses of that elusive state of being in different people.  When I see it, I cling to it, and I try to work out how it should look in my life.  It is not easy.  Like most people, I find myself getting caught up in the noise and I feel the frustration of that tension.   I take heart though from Daniel and his friends.  They were able to have that kind of balance in an upside down world.  So I trust that if I seek it, God will help me find it.   And even more important, that He will give me the strength and humility to bring it to a world in desperate need of it.