So this weekend I went to the Pinnacles National Park with my hubby and his parents.  We were all in their RV and it was wonderful.  It is fall, so the park has a total “old west” look to it, which some people may not find the most attractive, but I thought it was gorgeous.  The Pinnacles is known for its rock walls, talus caves and California Condors.

The first day that we hiked, we got to the set of caves on the trail and I had to say some quick prayers before I entered.  I do not like being closed in or confined, whether it is clothes, under water, airplanes and even caves.  I was with my hubby though and I could not hold him back, and to tell you the truth I did not want to hold myself back.  So we went into the cave and I did OK, till we finally got to a point where the outside light was no longer visible.  It was then that I caught my breath for a moment.  To me, this was the place of most danger.  The place where I could not get out quickly if I needed too.  I mean really?  They had just issued an earthquake advisory for Southern California a few days before, and while I was not in the south, we were directly on the San Andreas Fault line.   I am a lifelong Californian and we do not typically get advisories like that, so there must be something to it.  Right?

Well in the middle of the cave, these thoughts flash through my head quickly.    So after 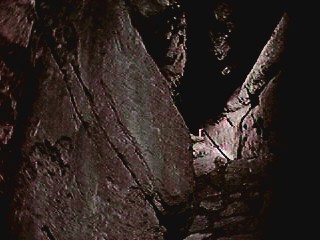 another quick prayer, I turned on my light and followed my hubby.  In retrospect, the length of the cave was very short, so I was able to easily get through.  So you would think on day two I wouldn’t have any problem with the cave?  Think again.

The hike we took the next day was even longer, and took us from one side of the park to the other.  It was a wonderful walk enjoying the quiet and the calm of the chaparral.  When we reached the cave on this trail, I felt pretty good.  I figured that if I could survive the first caves, I could survive this one.  I am sure that I said a quick prayer going in, but in looking back it was not enough.  We got to the inside of the cave, and it became dark again so we put our headlamps on.  I was doing Ok, but we came to a point where the further we got the more uncomfortable I became.  It was then we reached a spot where we would could not walk through any more.  We had to literally get on hands and knees to climb up a boulder about six feet up, then crawl through an opening that was probably 4 feet wide.  Now that is a good amount of room, but to a chicken, any smaller spaces seem very disconcerting.  It was at this point that my fear again reared its ugly head.  The words were on my lips to tell my hubby that I wanted to turn around, but I couldn’t.

So I started crawling up to the spot where he was sitting, waiting for me.  The higher I got, the better I felt.  I was cracking up, because I am sure that everyone could hear me.  As with each rock I touched I reminded God that He is my “rock” and my “shelter”.   Before I knew it, I was through the caves and out on the other side.  At that point, my fear seemed a bit silly.

The payoff?  Well the other side of the trail was my favorite part of the whole weekend.  It was beautiful!  There was a “courtyard” on the other side of the caves, surrounded by towering rocks.  After such a long hot walk, it was cool, refreshing and awe inspiring.  I thought as we continued to walk, that I could have missed it all if I had turned back.  I thought about what I wouldn’t have been a part of, if I had let that momentary fear change my direction. 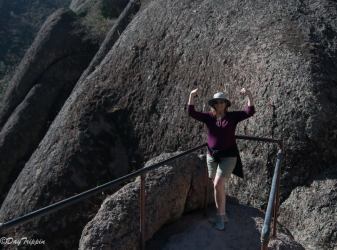 I was really encouraged by my experience at the park.   I read the bible and the stories of people are very much alive to me.  They help me see what God has done in the past, and how He is able to work in a person’s life.  To have a more personal reminder though, is even better. It helps me push through that moment of fear and find the courage to keep going.  It reminds me that even in the darkest moment, when the problem is all encompassing, an answer may shine through just a step or two away.

One thought on “My Rock”