This is what happens when you make up stories using the things you see.  The fog really made me think of film noir…. and the only other characters around were some otters and a couple of scuba divers.  Enjoy!

It was a day like any other day.  The fog had rolled in and even the sun couldn’t break

through the gloom.  It was early.  Like those first moments when you wake up and are caught between the heaven of sleep and the hell of wakefulness.   I always tried to get out before they came.  Those strange creatures that walk upon the land.  With their glowing white skin and strange seaweed hanging from their bodies.

They came and stared, and it always creeped a guy out.  Some threw rocks.  I am not sure why?  Rocks never did me any good.  Throw a guy some food…something to help break up the monotony of the day.

As I glided along the water, keeping an eye on the three headed monster that seemed to always be there, my morning was interrupted by the two.  They were always here, always wrestling, always disturbing my morning.

I turned my head the other way and grunted a reply when they greeted me with their incessant chatter.  And that is when I saw her.  She was laying on her back, but her breathing was ragged.  What caught my attention was the look in her eyes.  I had seen it before, more times than I care to remember.  Fear.  She had the kind of look that says swim before it’s too late.  I couldn’t though, I was never the kind of otter to swim away.  Not from a fight, and not from a damsel in distress.  It had gotten me into scraps in the past, but I was still here, so why change a good thing.

As I started toward her, she slowly sunk below the surface.  After the splash of her exit, it was then I saw it.    It was just a small disturbance, rippling along the surface.  Bubbles.  Air was coming to the surface.  Was it her?  Was she in trouble?

Aw hell, I thought, this probably wasn’t going to end well.  It was like the time I was caught in that damned net.  I thought that was the last trip to the surface for me, but that strange creature grabbed me and so I bit him.  He let go of me as fast as a shark comes out of the gloom.

In that split second I knew, I would go after her.  Hey, there aren’t that many fish in the sea, and an otter’s gotta do what an otters gotta do.  So I dove, and there I came face to face with two creatures that I had never seen before in my life.  They had long skinny fins and were black as seals, with a huge eye and some kind of shell on their backs.  Bubbles floated up all around them.  When they saw me, they started moving forward.  Their double tails swishing back and forth moving slowly, steadily, through the murky water towards me.

They were slow, and that gave me an advantage.  So I quickly maneuvered out their reach and dove down beneath them.  It was then I saw her.  She was slowly making her way back up toward the strange creatures.  She didn’t look scared anymore?  She looked, chagrined.  Like when you find out that the dark shape you have been running from in the kelp, is really your cousin Lou Seal and not one of those filthy sharks.

She swam near, lowered her lashes and I knew I was hooked.  I knew she wasn’t afraid 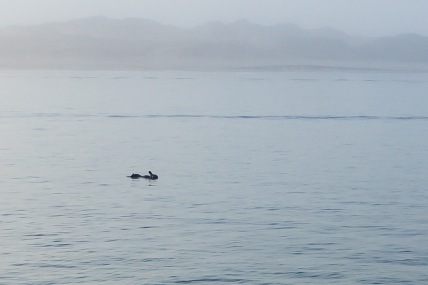 any more, and with that look I knew I was the one who was in trouble.  She was the hunter and I was the prey.  It was then that I envisioned my future.  Nightly grooming, babies, no more independence, the old ball and chain.  How could this have happened?  As I looked into her eyes, I thought, how could it not have happened.  Those eyes, that fur, and her knowing smile.

As we surfaced, the fog had lifted.  The sun was shining and we both watched as two of the land creatures climbed onto the shore.  Water cascading off their slippery black skin.  It was then that they looked back at us.  And you can imagine our surprise when they pulled off their one eye, and we saw that they looked totally different.  They were staring, baring their teeth.  They were very ugly creatures, like something you see when you go to the depths.

Well boys, deal me out.  This old otter has a place to go tonight, and it ain’t with you bums.  And while the chase was interesting, I can’t imagine what will come up next.   I think this will be the start of a beautiful…well you know.

One thought on “Otter Noir…”