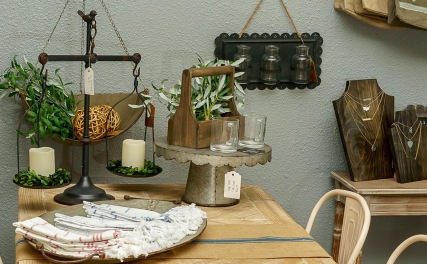 So when your husband leaves a home store and says, “that place is really cute,” then you gotta know it’s something special!  That was my husband’s response when we went into Studio 12 Homes in downtown Lemoore.  It was time to get back in the “pink” and see what the professional women of Kings County have going on.

This one was going to be a little different, as I messaged someone out of the blue.  Yes, I was exiting my small circle of friends and interviewing someone I did not know.  I had the pleasure of sitting down with Jamie Pierce Tulak, in a small sitting area that is right in the store. She, along with her husband John Tulak, opened the storefront in February of 2017.  The sitting area, she told me, is for meeting with clients.  Did I tell you she is a top producing real estate agent?  And not only that, she will get your home staged and ready so that it will sell quickly and for top dollar.  Is there nothing this lady can’t do?  It became clearer the more we spoke, that she is not just talented, but also has a heart for her community.
Let me step back a little, and take a look at how this all started.  Jamie went to college at Fresno State, and graduated with a degree in interior design.  When she went to work for a homebuilder, she thought that she would be using those skills in helping people with their new homes.  Instead she told me, “it was more sales driven, but I liked it!” It was then that she took the steps to become licensed and start working in real estate. 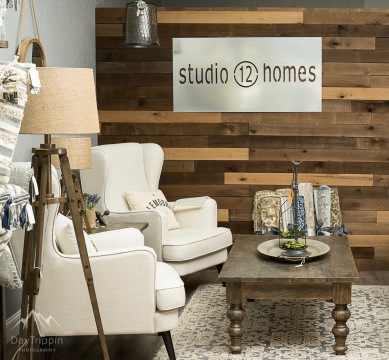 As her career took off, she found other ways to help serve her clients.  This is where the staging comes in.  It started with a friend who was having a hard time renting out a property.  Jamie suggested going in, staging the home and seeing if that would help.  The reaction was immediate, and the condo was rented the next day.  This was the seed that would eventually grow into a part of the overall business concept of Studio 12 Homes.  As word got around, she had clients who would ask if she could stage their homes.  As people told her that her style “was amazing,” Jamie realized that there was a need, and she “had the skill set” to meet that need.  In the beginning it was crazy, as she even pulled her husband into the staging work.  “He would go to work from six to two, and then we would stage homes from four to ten,” she told me.  It finally came to a time where they had to make a decision.  “We had to make the choice whether this was a really cool hobby or just jump in.”  So in 2015, this real estate agent branched out into Studio 12 Homes, offering home staging, along with real estate services.

And while this “study” is about women and their professions, I would be remiss without mentioning Jamie’s partner in crime, her husband John.  Theirs is a true partnership, as he is involved in all stages of the business.  “I am thankful that I get to do life with him,” Jamie told me.  When people ask how she can work with her husband?  She told me that she doesn’t really know, but “it just works.” 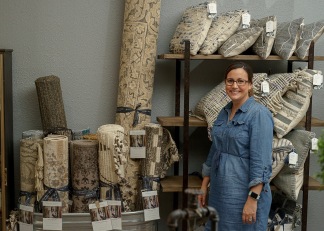 With so much success, why a store front?  It again came down to seeing a need, and feeling that she could meet it.  “People kept asking where to get it,” said Jamie referring to the décor that they used in staging homes.  The store is now filled with charming accessories that you would find in higher end shops in Clovis or the bay area.  Or even in Waco, Texas!  That’s because Studio 12 Homes is the only official retailer of the Magnolia Home Collection in Kings County. 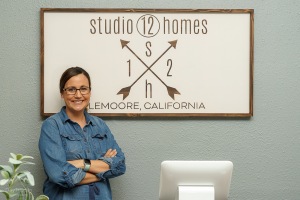 There was also another need that prompted the vision of what the store could offer, and that was bringing new life to Lemoore’s downtown.  She told me the story of how the doors had opened along this journey, from wondering why she even had an interior design degree, to how they were able to land the perfect store front. As the direction became clear, Jamie told me she “never felt nervous, ever!”   Jamie said that they are here for “however God has called us to be in the community.”  Whether that is through being a part of a downtown revitalization, giving to community causes, serving as a Director on the Kings County Board of Realtors, or even making sure that people have all the tools needed to sell their homes this wife and mother of two seems to have embraced that calling.

You can find Jamie and Studio 12 Homes on FaceBook and at http://www.studio12homes.com.