I thought it would be a nice drive to Porterville.  My son was there for work, and so we went down to have lunch with him.  It was a nice leisurely drive down CA43 and a relaxing lunch getting all the info on the job he was doing. 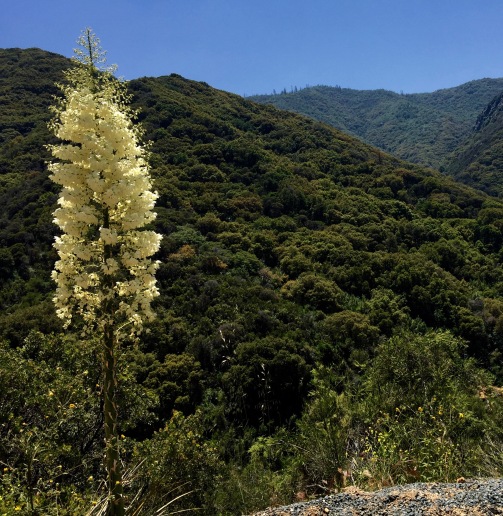 We left Porterville, and headed east.  My hubby kept asking if I remembered coming this way, but alas, my memory is shot and I kept saying no.  He thinks that it is crazy when I can’t remember all the places that we have been.

Not really, I love being in the forest, I just have a hard time distinguishing one from

another.  I also have a hard time with long mountain drives.  Today, my hubby had decided to go to the Trail of 100 Giants in the Giant Sequoia National Monument.  The trip from Porterville is mostly in the mountains.   Actually it is on a windy, two lane road.  So while it is only a little over 50 miles, it’s more like an hour and a half drive.

It really wouldn’t have been that bad, but because of the snow run off, the river in that area was closed.  Why would that be a problem?  Well, all of the parking lots that head down to the river were closed, and that meant that the facilities were off limits.  Really?  A lady can’t catch a break!  I was able to relax a little and enjoy the scenery, after giving a show to any poor animal with the bad luck to pass by. 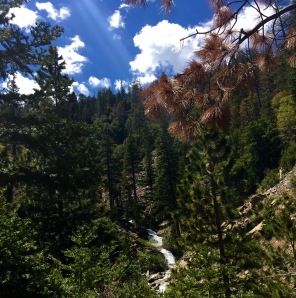 I was actually pretty glad we went up there on Saturday.  This National Monument is on a list of them that are under review by the Interior Secretary.  Why anyone would want to take the protection of that designation away from this area is beyond me.  There were many people out enjoying the drive and the grove of Giant Sequoias as we visited.  We saw people from different countries, boy scouts, families and lots of young people.  They were all out enjoying the fresh air and beautiful scenery.

When I think about it, and you know I will, it seems to me that this
was exactly why it was made a national
monument.  To protect it.  To give people the opportunity to breathe clean air,  see the lifecycle of the forest and give future generations the opportunity to reap the benefits of what we have sown.