When I was thinking about who I wanted to ask to be a part of this “study”, I was trying to think of people who have conventional professions, and then some that are doing things that seem outside of the box.

I met Connie Wenzel a little over a year ago in a bible study group, and I liked her immediately.  She is funny, a little sarcastic and has such a compassionate heart.  While she is retired, she has now moved into a new season of life as an author and artist.   I was also slightly jealous, as when I first met her, she was just finishing up writing and illustrating her first book, “Is This My Home Now? Featuring Addy”. 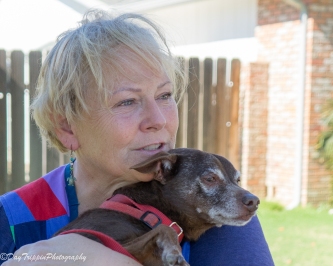 I went over to Connie’s home and was greeted by her and a menagerie of dogs.  She put them outside while we talked, although when they came out later for a photo shoot, I fell in love with how sweet they were.  And so good!  They just hung out on the lawn with us until it was time to go in.  Did I also tell you that she is a philanthropist?  She has created the non-profit, Addy’s Rescue Fund (ARF), that uses the proceeds from her books, art and calendar sales to support animal rescue operations in the area. 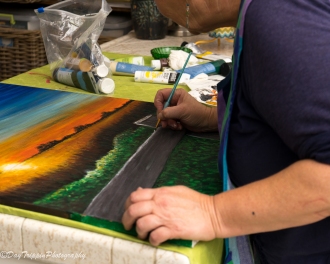 As we chatted in her kitchen studio, she worked on the painting “Texas Sunset”.  It is to be featured during the month of August in the FAST Café in Hanford.

Along with “Texas Sunset”, there will be other works displayed in Connie’s distinctive style.  Big flowers, bright colors, animals and some whimsy are all combined in many of her paintings. 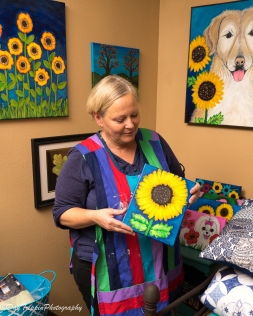 Connie has been an artist all of her life.  She told me, “Remember the TV guides, and the drawing contest in them?”  Yep, she sent them in.  She did various types of art in high school, but like many of us, these pursuits get moved to the back burner as we marry and work outside of the home. When she retired, she was able to spend more time painting.  What changed things was  Addy.  With her Chihuahua as inspiration, the idea came for a book, and ARF was born. As we talked, she showed me turtle earrings that had been given to her.  The inspiration?  Connie’s latest book, “Fiona’s Story, Featuring Fiona the Sea Turtle.”  When others are inspired to do what they can, “those are the blessings”, says Connie. 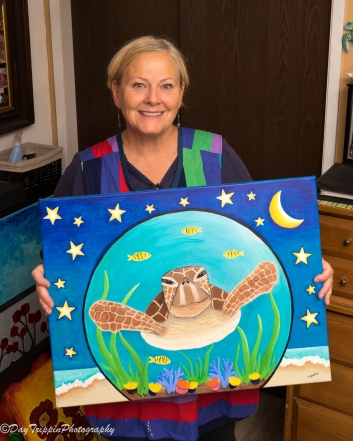 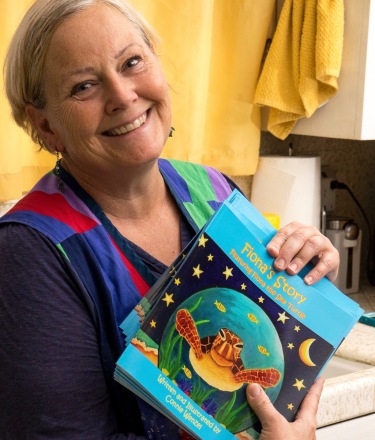 If you are interested in finding out more, check out Addy’s Rescue Fund on FaceBook.  There you’ll find links to Amazon where you can purchase Connie’s books, “Is This my Home Now? Featuring Addy,”  or “Fiona’s Story, Featuring Fiona the Sea Turtle.”   You can also stop by the FAST Café during August to check out Connie’s artwork in person.

One thought on “A Study in Pink….Connie”