The Mystery of it all…..

We had visitors and commitments this past weekend. While it is good to see people, it was even better when we were alone and driving up into the mountains.  Ok… well the foothills at least.  We went to one of our favorites spots, and I couldn’t believe the changes.  It was the last place we visited right before Mike’s surgery and it was his first solo drive after.  So much though had changed.

Where we typically go is more like a creek than a lake.  Monday though, it was definitely a lake!  We’ve been going to this spot for the past few years now, and I’d never seen it so full! Beautiful water!  I guess we aren’t in a drought any more.  We typically climb down from the parking lot and explore a bit, but today it was all under many feet of water.  So we found a spot, and just sat.  The surroundings had drastically changed, and so had we. 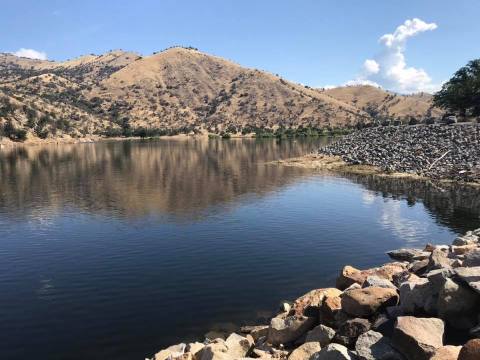 Three months after surgery has left a mark on our lives, but not really what I would’ve imagined.  Truthfully, I didn’t get a chance to ponder what “might be”.  We pretty much stayed in the moment, because the moments went by way too quickly to do anything else.  Where we are though….I could never have conceived it.  My mom asked if we were closer?  The short answer is yes.  How can that be?  That answer is much longer, and I really don’t know if I can fully explain it.  Actually, I know I can’t.  That I guess is the mystery of love.  Our love for each other and the great love God has for us.

Do I love Mike more than I used to?   I don’t think so, but I wonder if I sense it more because all the other stuff that gets in the way is gone.  Well, not gone.  Just no longer worthy of being thought about, focused on or worried over.  It’s like a clearer vision.  The lens that I see the world now is a little different.  It’s been adjusted.  And while the means of the adjustment was quite serious, I wonder if the result would have happened any other way?   Since I don’t know that, I just sit back and be thankful for where we are, and have hope for what will happen in the future.

One thought on “The Mystery of it all…..”