Laughing all the way to the…hospital?

So day 2 is always hard.  I always wonder, what will I write about now?  I also feel behind the eight ball because I am tired. Taking care of someone can be tiring. Part of it is physical, but it’s also a mental tired.  Since I tend to overthink things, I am sure that is a lot of it!  There is a spiritual aspect to it too.  The word “spiritual” makes it sound very serious, but it really hasn’t felt that way.

The spiritual in our journey has included a lot of laughter.  Just to give you a little background, my hubby started having headaches that progressively became worse over the last half of 2018.  He never really had headaches as a rule, so we felt that something was up.  He started missing out on work, and it was really affecting how he was able to live his life.  To see him get weaker and become a bit like a little old man, it was hard to watch.  So you can imagine the excitement when we had a diagnosis.  A brain tumor?  All right! And he can have surgery? Fantastic!

I can remember watching his face as he talked with the doctor that Saturday morning.  It lit up like Christmas!  We had just been given a present.  It was hope!  With that hope, what was ahead held no concern. We knew that it was all out of our hands, so we rested in those who took care of him.  The nurses, doctors and God.

At some point I thought of the verse that is quoted so often, “peace that passes all understanding.”  At that point I totally got it.  I mean really, brain surgery?  This is serious stuff, but we wanted it!  We had peace though, and I really didn’t understand how we could be feeling that way?  I didn’t argue though, it was a place I was glad to be. 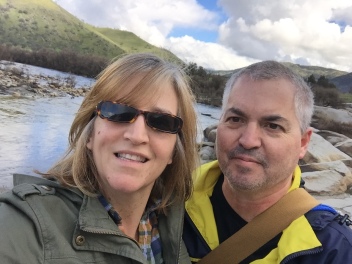 The neurologist gave us an idea to fastrack the whole thing.  So he called a doctor at the local emergency room to get us in.  My hubby was so excited, we would go to the ER and they would transfer us to a larger hospital.  It would be there that they would see the big mass in his head and they may even do surgery this weekend.  Isn’t it great?  There was not one tear, one moment of hesitation or fear.  We looked at each other shook our heads with smiles on our faces.

It wasn’t long till we got ready and were walking up to the emergency room.  Before we got in I asked my hubby, “who are we supposed to see?”  He looked at me with a smile and said, “Doctor Martin.” When I heard that we both started laughing and I knew it was going to be all right.    Doc Martin is a TV show we watch, and the doctor is such a character!  And of course as soon as the doctor came in we had to greet him as “Doc Martin.”  The doctor laughed…..he knew exactly who we were talking about!  I always knew God had a great sense of humor and today He proved it again!

One thought on “Laughing all the way to the…hospital?”